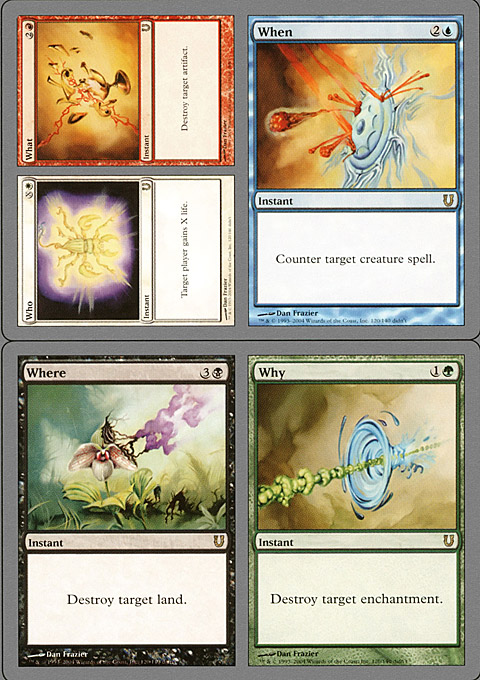 Hi everyone, it’s Daniel here from Monday Brews and I’m here to announce a new column! Once a week I will be posing a question to our columnists here at MTGDeckTechs and giving you their responses. These questions will range widely within the world of Magic: The Gathering, perhaps giving you a glimpse into the world of your favourite columnist here.

So, to start us off,  I’ve asked the below question to the team:

What is your favourite card(s) and why?

Now your favourite card could be the first rare you ever opened, your favourite combo piece or the card that best represents a moment in Magic history. Lets see how the team answered!

James R. – Author of our Method to the Madness series and presenter of our MTGDeckTechs podcast 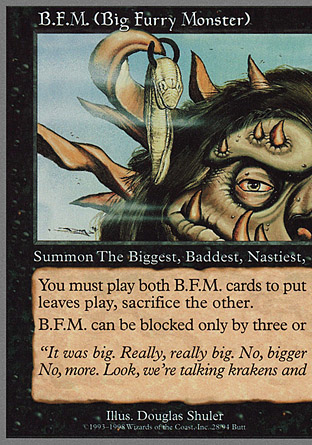 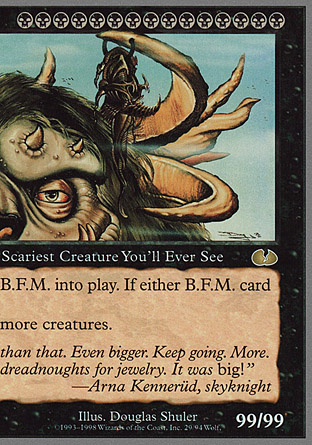 “B.F.M. (Big Furry Monster)! It’s an absolutely absurd 99/99 card from “Unglued” that takes two cards to assemble. Never having played with it, I remember when I was young and going through a Magic Card Encyclopedia type book (internet was a bit slower back then), I saw it and was blown away. It’s not so much the card’s play-ability, but how it completely opened my eyes to the possibilities of the game. The fact I’ve never forgotten the card after that moment like 16 years ago shows how cool I thought it was.” 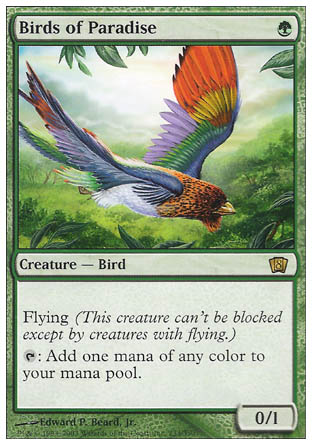 “Birds of Paradise. I am a Green Mage to the core and my favorite thing in Magic is ramp. Birds of Paradise was the first card that I bought from a game store to put in my Green ‘Destroy Artifacts’ deck in Onslaught-Mirrodin Standard. The 8th edition, also 7th, edition art is my favorite art and I was super stoked to see it reprinted in Ravnica, though with not as cool art. If I play a Green deck in modern, it will most likely have a BoP in it.” 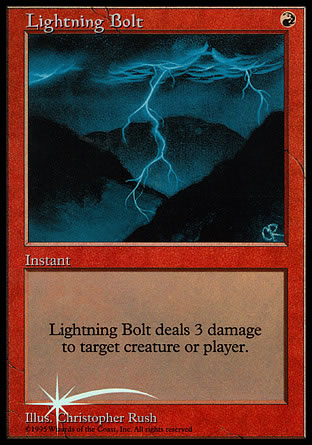 “Lightning Bolt. One Mountain for 3 damage. It’s an OG card that still holds up with a focus to do one thing and one thing only. BURN.” 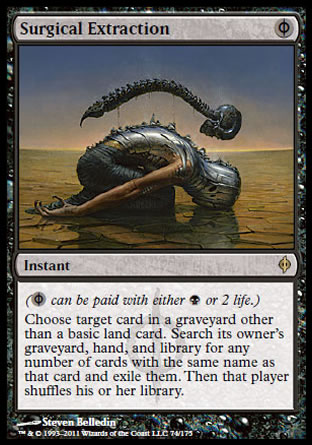 “I suppose I would go with Surgical Extraction because it acts as permanent removal of any card you need to get rid of once it hits the graveyard. That makes it a killer against any graveyard recursion which can normally be difficult to play against. On top of that, the art is so intricate and detailed, and is themed after my favorite plane of Phyrexia.” 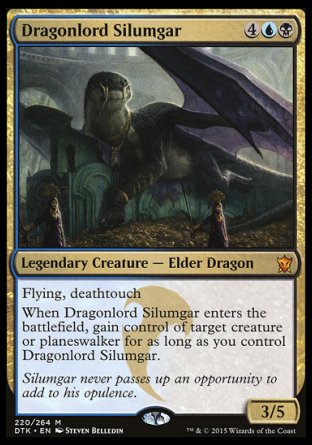 “Dragonlord Silumgar has a special place in my heart. There are few things in Magic more satisfying that beat someone with their own creatures. Using their own Planewalkers is even better. Plus deathtouch has always been my favorite ability.”

Harley Ng and George – Authors of the Brew City column 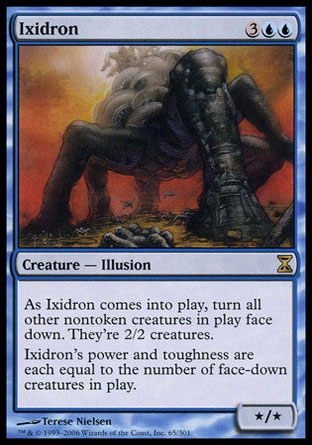 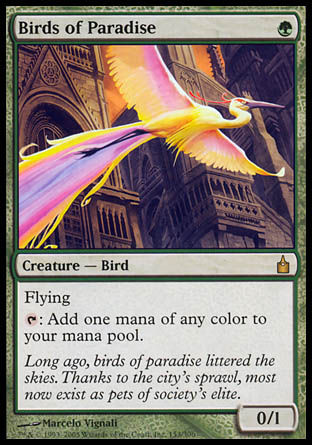 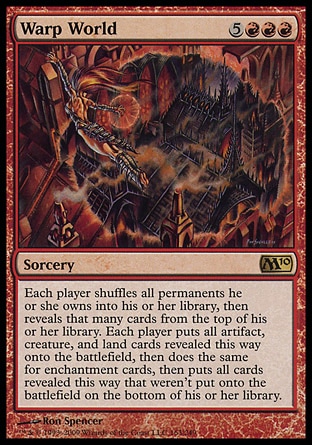 Harley: Ixidron
“I started playing around Onslaught so Morph will always have a spot in my heart. Morph is a game-within-a-game. Like poker, your opponent is always guessing what you’ve morphed down. It still satisfies me today when my opponent would waste a premium kill spell on a faced-down creature just to know what it was. When they brought back the ability in my favourite block – Time Spiral, Ixidron was a pure flavour-win for me. I brewed with this card a lot and finally settled on using it with Natural Affinity and Momentary Blink. Oh baby it was spicy!”

George: Birds of Paradise
“If I had to pick a favourite magic card, it would be Birds of Paradise. It has pretty much everything I want in a game of Magic. There is no better feeling that playing a Turn 1 Birds. It can accelerate me into explosive combos or meaty fatties. It also fixes my colors and allows me to play 2-, 3-, or even 4-colored decks with ease. It’s such a flavorful card because not only is it pretty, it’s also an embodiment of freedom. You will almost always be able to play it whenever you draw one, and it will almost always be useful in letting you play your other, more flashier spells easily. In a pinch, it can also chump block or even fly at your opponents for the win (e.g. Jeskai Ascendancy powered birds)! And thankfully, it is as delicate as it is beautiful, so your opponents will get to admire it too as they fire Lava Darts at it.
Variety, freedom, and flavor. I look forward to my old chum returning from Ordered Migration back to Standard again in the near future.”

Both: Warp World
“George and I both love Warp World. It is the perfect unison between Timmy, Johnny and Spike. Over the years, Wizards has printed many big red chaos spells that tried to do the same thing, but none of them lived up to the randomness, intensity and downright value of Warp World. (I personally have a IRL modern-legal Warp World deck that we will share in the near future).” 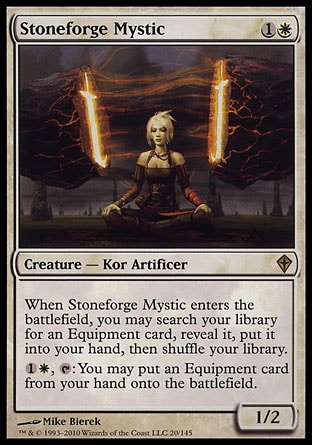 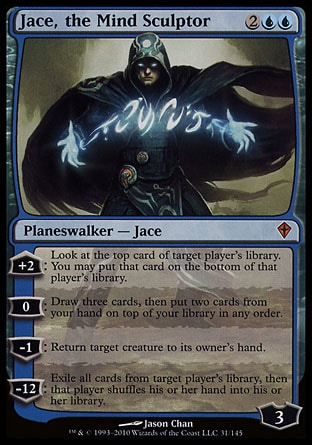 “Stoneforge Mystic the Worldwake print is one of my absolute favorites. Not for her ability but the card art alone is just beautiful.

I suppose Planeswalker wise I have to say Jace, the Mind Sculptor I know generic answers but mill was the first strategy I ever tried home brewing and I used Jace, Memory Adept. During this time I got into Commander and I learned of Jace, the Mind Sculptor and had to have one. It was the first card I bought over five bucks and I entirely built around him and even forced his ult any time I could in Commander. Some of the best times I ever had.

Realistically though Venser, Shaper Savant is probably one of my all time favorite and non generic answers. I am a control player so I like breaking cards, I like pushing myself to use under the radar cards. No one hardly uses him anymore and it makes it great to use his ability to counter uncounterable things or flash him in unexpectedly to bounce a game winning attack. He has immense value and I wished there was a way to build around him.” 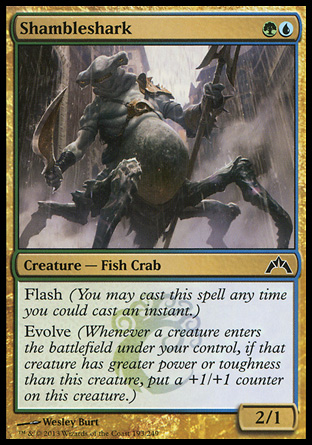 “So I have two favourite cards, one representing the time when I started playing Magic and my casual side, while the other represents my competitive side and achievements in Magic.

When I started playing Magic, the current set for release was Gatecrash and while a lot of the concepts were cool I can clearly remember two things going into my first draft. 1 – Boros Reckoner was the bomb of the format. 2 – Don’t draft Dimir. While one of those concepts did come true (Boros Reckoner really is a bomb and also the first rare I ever opened), the one card that stuck with me was Shambleshark. The idea that a card could be played at Instant speed was mind blowing and the fact that it could get bigger was incredible. Also, ITS A FISH CRAB.

Since I’ve started playing Magic more competitively, I’ve always looked at ways of attacking the format I’m playing. At Grand Prix Barcelona 2017, it was a format dominated by Mardu Vehicles and 4 Colour Copycat but I had decided to bring an Aetherworks Marvel deck that me and a friend of mine had built and tuned. Overall it lead me to my best finish at a Grand Prix, going 12-3 and losing my win and in into Top 8 and an invite to the Pro Tour. I ended up 17th earning myself a cool $500 but it has only strengthened my determination to eventually get to the Pro Tour.”

So there you have it, an insight into the world of MTGDeckTechs. If you have a question that you would like asked to the team, please leave a comment below and it could be featured!

Don’t forget to check us out on Facebook, Twitter, Twitch, and YouTube. Use promo code “TECHS10” for 10% off at Inked Gaming! If you would like to support our pages feel free to check out our Patreon page and earn exclusive access only provided to Patrons!