Hello and welcome to another episode of Raise Your Standards.  This week I figured we would take a week off from looking at decks in Standard that aren’t Aetherworks Marvel decks and we would discuss the cards that have recently been spoiled from Hour of Devastation.  Lately there have been a slew of leaked cards from the upcoming Commander release happening in a few months.  I, for one, am excited about the possibility of creating Cat Dragon tokens, but since this is a column about Standard, I won’t be discussing those cards here.

This series of leaks is very concerning since Wizards of the Coast typically has a plan regarding which cards are spoiled and in which order.  They’ve stated before that they spoil cards in a certain order in order to maximize excitement and to be able to discuss any new mechanics in an order that makes things easier to understand.  Another unfortunate effect of cards being leaked early is that outlets that have the opportunity to officially preview a card can have this opportunity taken away from them if their card is leaked early.  When this has happened in the past, Wizards of the Coast has been wonderful in finding a new card for these outlets to preview, but it’s simply not the same as the cards originally chosen to be previewed usually have some sort of connection to the entity previewing them.  And while we here at MTG Deck Techs have not yet had the opportunity to preview a card, I can assure you I would be very disappointed if a card chosen for me to preview was leaked.

Most leaks happen due to some outside source gaining access to certain cards and then posting images of them on the internet.  Many times this will make the community at large question the authenticity of these leaked images.  Some times these leaked cards are found to be hoaxes, perpetrated by individuals simply seeking attention.  This leak is different though.  The three cards we’ll be taking a look at below were leaked due to some sort of internal error at Wizards of the Coast, as they appeared on the Wizards of the Coast website.  Therefore, there can be no doubt as to the legitimacy of these leaked images.  Let’s take a look at our first card. 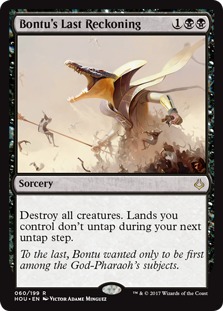 It’s been said before that sweepers costing four mana were too efficient for our current Standard.  That’s why cards like Fumigate and Planar Outburst cost five mana.  Many people have questioned how this card can cost three mana if the previous statement is true.  However they don’t seem to be taking into account the second sentence in the text box.  The fact that (all) lands you control don’t untap during your next untap step effectively means that this card potentially costs six mana, assuming you don’t have any non-land ways to create mana.  And it can quite possibly cost more than six mana depending on the number of lands you currently have when this spell is cast.  It doesn’t only keep the lands tapped that were used to cast this spell.  It affects all of your lands in play that are tapped.

The next two cards that were leaked are both planeswalkers.  The first is Samut. 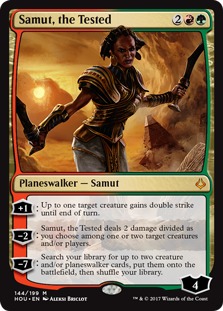 Samut, the Tested is an interesting card, but not nearly the powerhouse that Samut, Voice of Dissent was.  The +1 loyalty ability is a nice way to mess with combat math, but is very dependent on you having a creature in play that can kill an opponents creature if they should block with it.  The -2 loyalty ability is an effective, if slightly underwhelming way, to deal with an opponents blockers.  It’s nice that the damage can also be sent towards a player, but it’s really mediocre for the cost of 2 loyalty counters.  The ultimate -7 loyalty ability checks off all of the boxes for an ultimate ability.  It’s exciting.  It’s flashy.  And it’s powerful.  The fact that Samut can summon both creatures and planeswalkers with this ability is amazing since you can get whatever tool you need from your toolbox at the time.

The final planeswalker leaked is the newest version of Nicol Bolas. 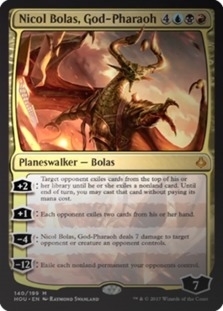 For the low, low price of just seven mana, this card has a lot of potential.  The +2 loyalty ability is a great way for you to use your opponents cards against them.  The +1 loyalty ability is an effective way to neuter an opponents hand.  The fact that the cards get exiled means that you’re not inadvertently helping them trigger delirium.  The -4 loyalty ability allows you to deal a huge amount of damage directly to your opponent, or you can use it to basically destroy nearly an creature your opponent has that is troublesome.  And, if you manage to get the 12 loyalty counters needed for the ultimate ability, it’s likely game over at that point.  It’s hard to imagine any scenario where your opponent will be able to come back from devastation like that.

One other card to keep in mind is Dark Intimations.  With this card in your graveyard, your Bolas starts with 8 loyalty counters, which allows for his ultimate ability to happen as quickly as 2 turns after casting this planeswalker.  That’s very powerful, especially since Nicol Bolas, God-Pharaoh will likely be best utilized in an Aetherworks Marvel deck.  Unless that card gets banned, which is a whole other topic for some article in the future.

So, there you have the cards that Wizards accidentally leaked.  What are your thoughts on them?  Please let me know by leaving a comment below or email me directly at mikelikesmtg@gmail.com.  And join me back here again next week when we’ll take a look at Standard and attempt to find fun, innovative decks to play.  I’ll see you then!