Hello, and welcome to another episode of Raise Your Standards.  After taking a week off last week to give you some advice for your local Store Championships, I’m back this week to take a look at another innovative deck that you can play during the last few weeks of Standard prior to rotation on October 5th.  The deck I have for you this week is made up of a lot of cards that didn’t have a home until the printing of a certain card in Magic 2019.

Sai, Master Thopterist – This is the card I was referring to earlier.  Sai, Master Thopterist was the missing piece to complete this deck that we had been looking for since the majority of the other pieces were released in the Kaladesh block.  His ability to create a Thopter token every time you play an artifact allows you to chump block whenever you need to or hold those tokens back in order to attack with a bunch of evasive threats.  If you do chump block with your Thopter tokens, don’t forget that you can sacrifice them with Sai’s activated ability after blocks are declared to allow you to not take damage and still draw a card.

Ornithopter – Here’s a card that usually isn’t worth playing.  However in a deck like this having a 0-cost artifact to play when Sai, Master Thopterist is on the battlefield is very nice.  It’s also a great target to return to your hand so you can cast it for free again in the future.

Aetherflux Reservoir – This is a secondary win condition for this deck.  When you have Aetherflux Reservoir in play, you’ll want to carefully plan out your turn in order to maximize playing Paradoxical Outcome and/or Baral’s Expertise so that you can maximize the life you’ll gain.  It’s easy to make a misplay when doing this which can leave you just short of the 50-life you need to deal 50 points of damage to your opponent with.

Paradoxical Outcome – This is a great way to return a bunch of low converted mana cost (CMC) artifacts to your hand in order to play them later in the turn (likely to gain more Thopter tokens with Sai and to gain a ton of life if you have Aetherflux Reservoir in play).  Alternatively, it can act as protection in the event that your opponent is playing a removal spell that you want to make fizzle.

Baral’s Expertise – Often you’ll end up playing this card as a mini-version of Paradoxical Outcome without having a follow-up spell with a CMC of 4 or less to play.  That’s okay, especially when it allows you to win the game, but it feels better when you have that follow-up spell that you can play.

Commit // Memory – Commit is another way for you to return an important card to your deck in order to play it again on a future turn.  It’s also a way for you to protect yourself from an opponent’s spot removal.  Alternatively, if you have a fleet of Thopters and your opponent has a few flying blockers, you can always use this to get rid of their best blocker, assuming you think you’ll be able to win in the next couple of turns.

Reverse Engineer – Drawing three cards for two Blue mana is a great deal.  That’s exactly what this card offers you since you’ll likely be able to tap an artifact that otherwise will not be doing anything for the turn.

Inspiring Statuary – This card enables you to cast any of your cards that can return your artifacts to your hand for quite a discount.  It also can allow you to cast Sai, Master Thopterist for a single Blue mana.  Plus, this is one of those artifacts doing nothing that you can easily tap for improvise.

Mox Amber – This deck is one of the few places that Mox Amber can really shine.  As a 0-cost artifact, it’s a great target to return to your hand with Baral’s Expertise or Paradoxical Outcome.  If you have Sai, Master Thopterist in play and a couple of these in your hand, you can always play one, tap it for a Blue mana, and then play the other copy.  Doing this nets you two Thopter tokens and a floating Blue mana that can be used for other spells in your hand.

Navigator’s Compass – While you’re likely to never use the activated ability of this card, this is a useful way to gain life which can be quite important when facing an aggressive deck.  It’s also a cheap target to return to your hand in order to replay it later.

Renegade Map – Here’s another 1-mana artifact that is a great target to return to your hand with Paradoxical Outcome or Baral’s Expertise.  Also, since this deck only plays 18 lands, it’s very useful to use to help you get up to four lands, the minimum you’ll want to keep things running smoothly in this deck.

Prophetic Prism – At 2-mana, this is one of our more expensive artifacts in the deck.  As such, you’ll have to think long and hard about returning this one to your hand.  If you have enough mana, it can definitely be worth it as drawing a card when it enters the battlefield can help find your next 0-mana artifact faster.

Inventors’ Fair – This is a pretty easy way for you to gain a steady stream of life throughout the game.  It’s also a great way to search for your Aetherflux Reservoir if you decide that’s going to be your route to victory.  And if you happen to have both Inventors’ Fair and Aetherflux Reservoir in play at the same time, your opponent will definitely begin to notice the clock ticking against them.

Zhalfirin Void – Most decks can’t afford to play more than one or two copies of a land that only provides colorless mana, but this deck runs a full playset of them.  It’s a very useful land that can help you find what you need from your deck sooner thanks to it allowing you the ability to scry when it comes into play.  Make sure to take advantage of that and aggressively scry for whatever card you need at the time. 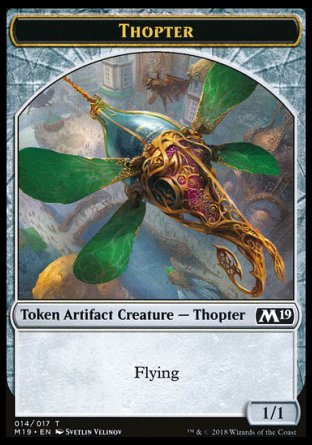 Another week goes by and we’re another week closer to the release of Guilds of Ravnica.  While this deck will not be playable once rotation happens, I’m curious to see if Sai, Master Thopterist can find a home elsewhere.  What do you think?  Will Sai find a new home in Standard after rotation, or will he be unplayable?  Let me know by leaving a comment.  Or you can reply to me directly on Twitter (@mikelikesmtg), or email me directly at mikelikesmtg@gmail.com.  And, don’t forget to like our Facebook page (https://www.facebook.com/MTGDeckTechs/) to be sure to be notified when a new article is posted.