Hello, and welcome to another episode of Raise Your Standards.  With the release of Guilds of Ravnica coming up and rotation looming, innovation in Standard becomes less and less of a factor for people.  It’s often easier in times like this to simply pick a deck that’s fun to play and ride out the next few weeks with it.  Once preview season for Guilds of Ravnica begins, innovation will return.  So for at least the next couple of weeks I’ve decided to showcase a few fun, tribal decks that you can enjoy while they’re still legal in Standard.  This week, I’ve decided to focus on a tribe that is near and dear to my heart, Cat Tribal.

The cat tribal deck I have for you this week is made up of around 50% cards that will rotate from Standard and 50% that will remain.  Let’s take a look at the deck.

4 x Sacred Cat – Sacred Cat has been the starting point for most of the cat tribal decks since the card came out in Amonkhet.  For just 1 mana, you get a 1/1 with lifelink.  When you factor in the fact that this creature can return to the battlefield from the graveyard for the same mana cost, you get a cheap, effective chump blocker that also pads your life a bit.  It also has great synergy with a couple of other cards in the deck that care about Cats.  Once rotation happens, it’s unlikely we’ll get another 1 CMC cat, so a possible replacement would be Ajani’s Welcome.

4 x Leonin Vanguard – Here’s another 1 CMC cat that gets bigger during combat if you have at least two other creatures.  That’s a pretty low bar to hurdle for this deck.  Even though it’s not hard to get the bonus, the +1/+1 you get isn’t much, and this is a pretty bad card to draw in the late game.  Luckily there are other cards in the deck to help give Leonin Vanguard a boost.

4 x Adorned Pouncer – This is another card that will be difficult to replace once rotation happens.  Being able to eternalize this from your graveyard allows you to play this early and block with it as needed to ensure you get to the mid-to-late game where this deck really purrs.  By the time you eternalize this, you’ll likely have something in play that will be able to boost all of your cats.

4 x Pride Sovereign – Pride Sovereign is the lone Green cat in this deck, but adding Green for this cat is definitely worth it.  Not only can this 3 CMC cat come down as a huge threat (depending on the number of other cats you have in play), but it also brings along its own army.  While creating additional 1/1 Cat tokens with lifelink comes at a high cost, some of that cost is mitigated once you have Radiant Destiny in play as you can attack with Pride Sovereign (with vigilance) and exert it before damage is applied to boost its power and toughness by 2.

4 x Leonin Warleader – Much like Pride Sovereign brings along its own army, Leonin Warleader does something much similar.  Once you attack with this card, your opponent will likely try to double or triple block it so that you’re not spewing out Cat tokens every turn.  This becomes increasingly difficult once you’re able to buff Leonin Warleader with +1/+1 counters or the bonus from Radiant Destiny and Regal Caracal.

4 x Regal Caracal – For 5 mana, Regal Caracal provides you with 7 power and 7 toughness spread over three bodies, with two of those having lifelink.  That’s a lot of value.  And, since every other creature in the deck is a cat, if you have any other creatures in play, they’ll get a big bonus when this cat comes into play.

3 x Ajani, Adversary of Tyrants – In this deck, you’ll want to try to use Ajani’s +1 loyalty ability as often as you can in order to reach the 7 loyalty needed to create his emblem.  If you’re able to create 3 1/1 Cat tokens with lifelink every turn, you should be able to outrace any opponent that’s attacking on the ground.  You might have trouble against opponents that have a lot of flying creatures, but that’s what Thopter Arrest is for.  Ajani’s -2 loyalty ability shouldn’t be used often, unless you’re in dire straits and in desperate need of a creature. 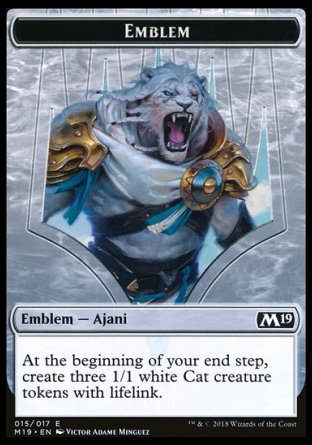 2 x Thopter Arrest – Thopter Arrest is the only means of interaction with your opponent that this deck has.  Since there are only two copies of it in the deck, make sure each use counts.  I wouldn’t waste one of these on a small creature unless I was going to die from that creature in the next couple of turns.  Since this deck has a lot of potential lifegain, use your life total as a resource and think carefully for where you want to use your removal.

4 x Radiant Destiny – Radiant Destiny is the card that allows this deck to turn the corner from being defensive to being very aggressive.  Not only does it pump all of your creatures (assuming you’ve chosen cat as your creature type), but there’s a good chance you’ll have the City’s Blessing which means your creatures all have vigilance.  Being able to attack and still be used for defense is a huge bonus, especially if you have a beefed-up Ajani’s Pridemate or Pride Sovereign.  And this enchantment isn’t legendary, so if you happen to get multiple copies out the bonuses keep piling up. 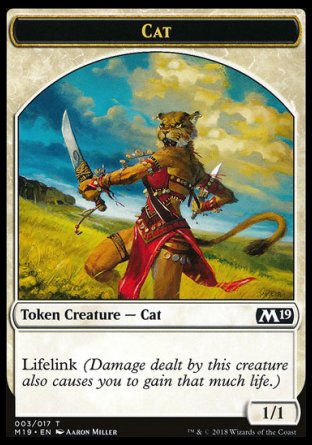 As long as your local meta isn’t filled with hyper-aggressive decks, this might be a fun deck to play for the next few weeks.  With much of it rotating out of Standard at the beginning of October, it’s unlikely that a full cat tribal deck will be playable; however cats could be prominent in a lifegain deck or a cat hybrid deck.  I think goblins would be a good pairing with cats, since the red would also be good for removal spells as well.  But then again, I’m always partial to adding Red to a deck.

What are your thoughts on the future of cat decks?  Let me know by leaving a comment.  Or you can reply to me directly on Twitter (@mikelikesmtg), or email me directly at mikelikesmtg@gmail.com.  And, don’t forget to like our Facebook page (https://www.facebook.com/MTGDeckTechs/) to be sure to be notified when a new article is posted.