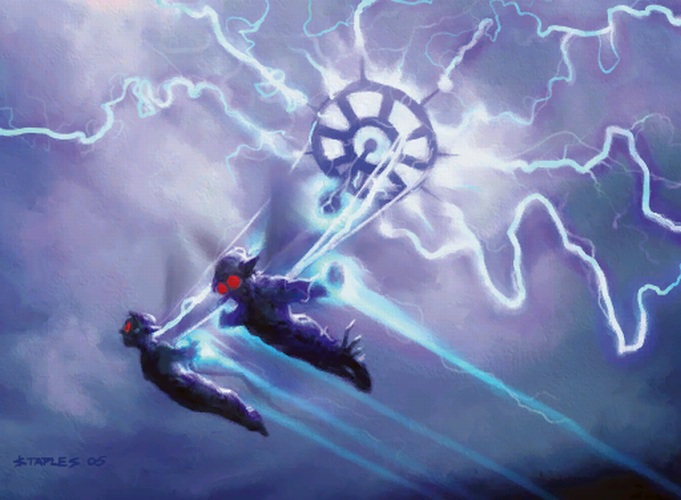 So here we are, in the shadows of the World Championship where we saw the last of our current standard and are now looking forward into the light of Guilds of Ravnica. It is that week before pre-release where everyone is itching to get their hands on the new cards and with the full spoiler out there is no better time to start brewing some standard decks for Week 1!

It’s no secret that the most successful decks in Week 1 of a standard rotation are aggressive red decks, so in keeping with that tradition, here is a deck to take down your release day event!

Izzet Wizards? Yes, it is. The deck that made a small impact in Dominaria standard is back with a bang (I’m sure that bang was intended by Niv-Mizzet, he normally has a permit for those sort of things) and I’m here to explain why. With rotation, we have arguably lost the two worst cards in the deck: Riddleform and Spellweaver Eternal. In Guilds of Ravnica, we are seeing reprints of cards that have previously featured for the Izzet guild: Wee Dragonauts and Goblin Electromancer which are better fits for the deck. The one brand new card in the main deck and one card that I’m very excited for in Guilds of Ravnica is Ionize. While a 3 mana counterspell is usually unexciting for an aggressive deck, the ability to shock the opponent for even daring to interact with you is what pushes this card over the edge.

In the sideboard, we have one card which appears to do its best Thermo-Alchemist impression and that is Electrostatic Field. In a focused burn deck, this card would easily be one of the first cards in the deck, but as we are looking for Wizard synergies, it has been relegated to the sideboard for our deck for the anti-aggro matchups.

Lava Coil appears to be a cross between Roast and Incediary Flow, but even with the rotation of Scrapheap Scrounger, the exile clause is still relevant with Rekindling Phoenix and Arclight Phoenix now joining the fray. The 4 damage also is a relevant amount for some of the newer cards in the set such as Charnel Troll and Conclave Cavalier.

The controversial addition to the sideboard is one copy of Risk Factor. Typically Browbeat style punisher effects are not very powerful and rarely see constructed play. This is due to the fact that your opponent makes the decision but with the card being at instant speed and with Jump-Start, it does have potential so we are trying it.

We have rounded out our sideboard with the returning Disdainful Stroke and Dire Fleet Daredevil. Disdainful stroke gives us an efficient way of dealing with sweepers our opponents may have along with Teferi, Hero of Dominaria. While I would not expect control to be abundant in week 1 of standard, the power level of Teferi cannot be denied, so it’s included as a failsafe. Dire Fleet Daredevil is included for opposing midrange decks, utilizing the power of their cards against them and making Mission Briefing less effective. It would also have a space in the mirror stealing burn spells and that alone merits its inclusion.

So there we have it, a first look at how standard could shape up to be from Guilds of Ravnica. If you have a card you want to see built around, please let me know and it may get featured in a future article!